I arrived at the conference just after 9am. There was already a crowd of people gathering, nearly all of whom I didn’t know. I found Tod, who was of course, busy setting up and so I nervously hung around near him until I could latch on to someone who I could talk at, that’s always good for the nerves.

Thankfully I found Ivan, the ex EDL leader who was also there to share his experience. We chatted for a bit until Piers arrived with the bits for the Nacoa stand and I set off with him to set up.

As the room begins to fill, my anxiety is there, not because I know I will be speaking but because there’s a lot of people around. I’m amazed by the turn out. There’s clearly some amazing spirit in Lowestoft.

I mention to someone that I don’t imagine many people to still be there in the afternoon when I speak. I know I say this because my mind is telling me I’m there to make up the numbers and everyone’s there for the morning speaker, the 7/7 surviver Dan Biddle. This doesn’t consume me but its a lingering thought.

Then I am told that Dan is going to be late, so I’m up first… in 10 minutes time. Inside I’m panicking. The next thing I know, Tod is on stage introducing me. He’s saying nice things about me and I’m struggling with it, I don’t know how I should look or what I should do with the compliments.

As I approach the stage I look confident, my back is straight and I look out to everyone. This is the COA in me and an important thing to know about mental health in general. Despite my anxieties and the million thoughts going through my mind all morning, my awkwardness, my shyness, and my fears you would have no idea. Its hidden, and I’m good at it, as the child of an alcoholic I’ve had to be. This is important, because it means the whole room could be suffering in similar ways and I would have no idea.

I take the mic and begin to speak and I tell the truth, and as I begin to get vulnerable, I see people nod. I notice I’m being heard, and those feelings begin to leave me. My body relaxes.

I’m not alone and in an instant I’m reminded that the things that I think keep me alone in this world are often the ones that attach me more people than I could know.

We are connected and it’s this connection that has real healing.

I feel the love.

After I talk, I connect with a whole host of different people. We share a common bond, our vulnerabilities. We talk, because we feel heard and we are no longer alone. 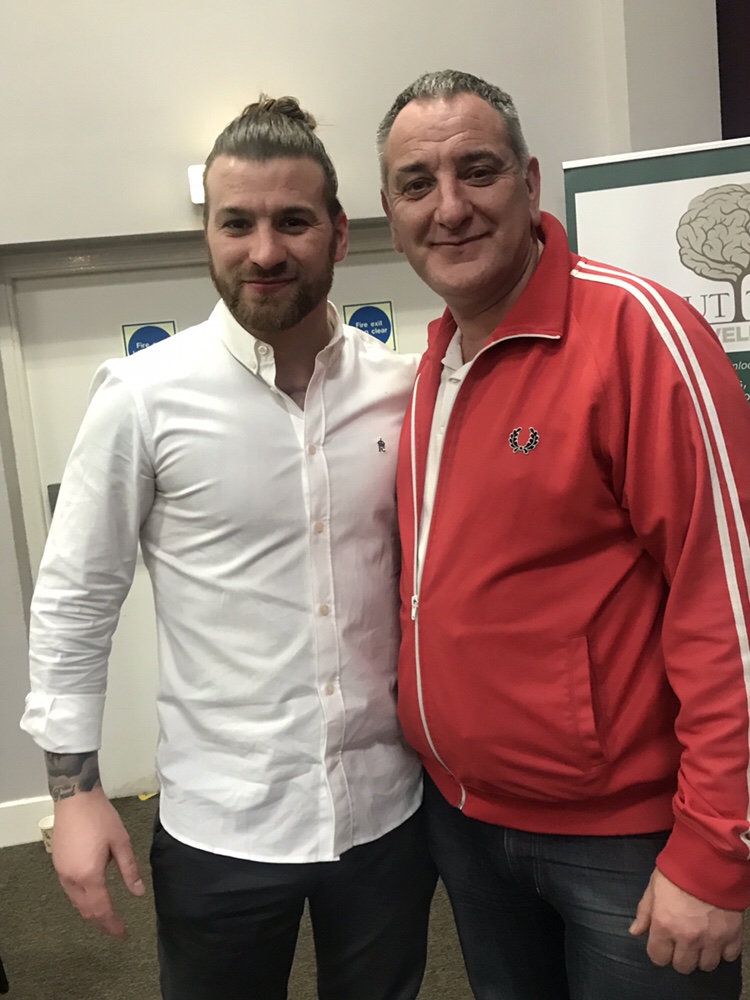 Later Ivan speaks. This guy is opening dialogue that most want to avoid. An ex EDL leader, surely I know what’s coming, but I’m surprised. A see a man who begins to talk about his own mental health. He too, gets vulnerable and we all connect. His story also turns out to be one of love. Not the romantic kind but the kind that is the opposite to hate. The one that beats hate.

It’s the real connections Ivan made with the very people he thought he hated that have instigated his desire for change.

And so to Dan Biddle. Surely this is the story of a guy tougher than anyone you’ve ever met, a story of a fighter, a hero? Well it was all those things and then some, but what was the biggest stand out of his story for me? It was that love and a meaningful bond has the power to save lives.

Dan and is wife are two amazing human beings that can’t help but make you feel love and connection. I say ‘make you feel’ because just their presence made me feel connected.

This event has left a mark on me and it’s one of connection, one of love. I’m sure there’s lots of science to explore in mental health, lots of developments to be made, but what the Lowestoft conference taught me is that our own stories, when heard, can be the greatest tools we have.

Strength comes in our most vulnerable moments. Vulnerability opens opportunity for bonds and love really can be the greatest ingredient for change.

Forgot TedTalks, there’s a new game in town TodTalks and they are coming jam packed with love and connection.