This is an incredibly powerful piece written by Tom that shows the destructive progression of alcoholism and the emotional turmoil one goes through watching as they eventually lose their parent to the illness. If you feel impacted in anyway, remember Nacoa can offer help and support and if you would like to share something then please get in touch.

My story starts being in a wealthy family. From the day I can remember I had everything I wanted, my mum and my dad spoilt me and my sister with the latest toys and gadgets living in a nice house in Surrey.

My dad like a lot of people loved a drink on the weekend, and while young I noticed nothing wrong with this behaviour. However, whenever I saw him stressed, he would turn to a few drinks to forget which now looking back was a red flag.

Over the years, his stresses increased. His first major blow was losing his business he had set up which involved a lot of drunken fights with employees in our house, this was my first experience of drunken senseless behaviour which was soon to become a regular norm for my childhood. After that he took a job he didn’t particularly enjoy to provide and handled a stressful property portfolio on the side, he found himself drinking more during the evenings to escape the reality of life, it was at this point aged 10 I knew something wasn’t right with my dad’s behaviour. I would go around to friends houses and wonder why their dads were sitting there watching TV without a drink in their hands.

His father then passed away suddenly during this, his go to stress reliver of alcohol turned from the usual weekend drink, to a 3-day drinking session, then 4-day to every single day. We still had money, but family holidays would revolve around where my dad could drink and how drunk he had got that day. His behaviour turned into that of where he did not seem to care about anything or anyone, a common sign of addiction, his alcoholic behaviour combined with his depression.

The bad behaviour worsened and soon he sent home from work for getting drunk, and found on park benches on regular occasions, arrested at airports flights home for drunken and disorderly behaviour which was hugely embarrassing to see as a child. It was common behaviour to ignore him when out in public and pretend I didn’t know him.

This put massive stress on the marriage as he started changing physically and emotionally, he had gained a lot of weight and was depressed to the point of suicidal thoughts. It was heart-breaking seeing someone go from someone so successful to an alcoholic, attempts were made by family to help him with the alcohol, but he could not help himself. 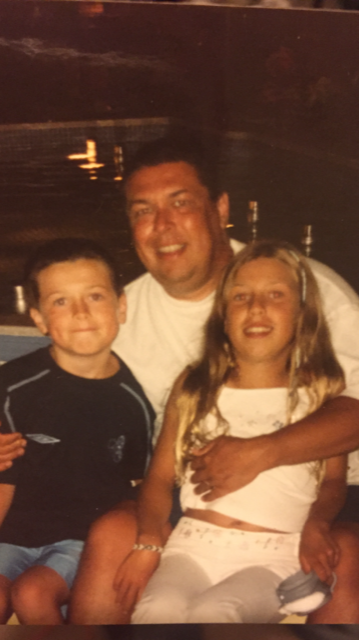 Aged 14 my mum could not handle the behaviour and left with my sister. I made the decision to stay with my dad and this is when it really started to go downhill, I was the last family member left as he had pushed everyone away and I felt if I left him he would have ended his life. I stayed with him and grew up quickly and tried to look after him as best as I could with what I had, I done my own cooking, ironing, shopping and pretty much became an adult from that day.

Most days I would return from school alone and await what carnage would happen when he entered through the door later that night from the pub. I would have taxi drivers knock on the door asking to help get him out of the taxi, neighbours would knock on the door as he had fallen asleep in their garden, police would knock saying he had been involved in drink driving accident and most hurtful and often would be him coming through the door in a flood of tears where I felt powerless to help him. Everyday was different with a new situation and challenge, filled with different emotions of anger, guilt, frustration, sadness, shame which are all-natural emotions to feel.

The worst situation I can think of was when I had a phonecall from him saying “Goodbye” as he was near to ending his life, and one near fatal crash drink driving crash. Some days I would have to wait until he had come in and fallen asleep to steal some money out of his pocket, so I could eat at the next day as he was so out of touch with reality. I would lie to everyone including family, police, social services about his drinking out of embarrassment and shame and the fact I did not want to lose him. I tried to take care of my dad as best as I could and there was a huge role reversal where it was like I was his father, where I would try and comfort him and tell him some truths. Eventually I started to resent him as no matter how many times I would fight scream, shout, cry about his behaviour he would not change. The withdrawal symptoms slowly got worse and I would often see my dad shaking when he wasn’t drinking and his memory fade and him forget where he was and what he had done.

I went away to live University to partly escape my dad, who although I loved dearly I had to get on with my life. I knew from a young age with his lifestyle he would not make it past 60 years old, not to my surprise he died just a year after I started university with multiple organ failure, years of abusing his body finally caught up and he passed away aged 49.

With the death I would lie to people saying he passed away from a heart attack and did not mention the fact he was an alcoholic or anything that went on to anyone and was not honest with myself. People especially from his pub would say he was a legend who was always smiling, but I struggled to see why people thought this when his behaviour down the pub was different to how depressed and out of reality he really was at home.

For years I felt extremely guilty about leaving to chase what I wanted to do at university, it’s no coincidence that my dad’s drinking and his health deteriorated more when I left and I felt guilty he was alone. I would beat myself up about if I could change something, in truth and what I now know about addiction you can only help someone when they are ready to change.

As I had my own mental breakdown years later, the first step was to be honest with myself about what had happened and that I did not need to be brave all the time. I had lied to people about the situation out of shame and just pretended that everything that happened was normal. I did not realise how traumatizing things were until I had therapy for the first time.

It took years to forgive him as I held so much anger and resentment, and for some people they will never be ready to forgive someone. I found forgiveness by looking at the bigger picture looking into why my dad became an alcoholic, by writing down the story and seeing how he turned went down that road of addiction. No alcoholic ever plans to become one, likelihood is they are dealing with their own trauma, mental health issue or life stresses and they have a poor coping mechanism.
You must also know you are not responsible for your parent’s actions or feelings; you cannot change them. Being young I did not handle a lot of situations well, but I shouldn’t have been in the position in the first place, now I practice self-forgiveness with this.

The actions and characteristics of a drunk parent who cannot look after themselves are different to that of a mentally healthy parent outside of addiction. My dad was extremely funny, extremely generous and most importantly a genuine loving man who when mentally sound he would provide as best as he could. I feel sorry for him now more than anything, when he was drunk and depressed all these qualities were gone, you must always remember that version isn’t a true reflection of themselves.

The feelings of angry, embarrassment, betrayal, shame, guilt is natural and it’s ok to feel these. You must process these in order to get heal, you have the chance to change and learn from your parent’s behaviour and there is help there in the form of therapy, group meetings and talking. Most importantly, know you are not alone in this and there are thousands of other people who have dealt with similar circumstances. You are not alone.